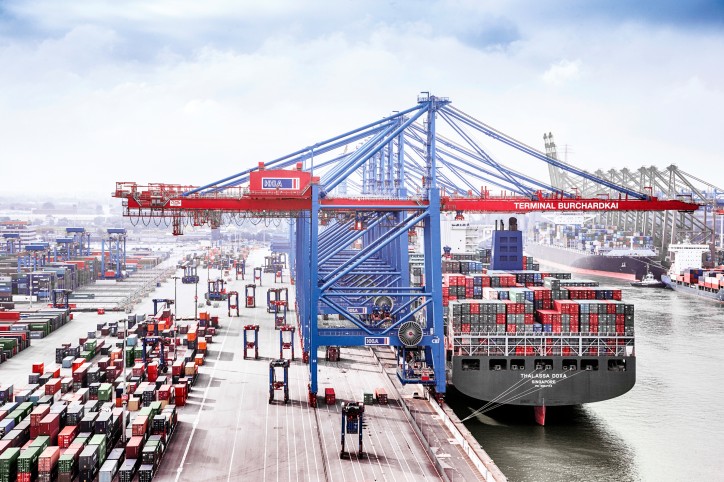 Shipping plays such a key role in our everyday lives, but unless you work in the field, you hardly take the time to wonder how products reach you and where they come from. So in this post, we are going to investigate the world’s busiest container ports in the world using R and finish up with plotting some interactive plots from the Plotly and Leaflet JavaScript libraries.

My inspiration for this post came from a tutorial I did from Sharpsightlabs while learning how to use dplyr and ggplot2. The tutorial showed me how to use rvest to scrape an HTML table from Wikipedia pages, and it is how we are going to get the data for our analysis.

First, we need to read in the html page from Wikipedia.

You can find the data used in the Analysis at the following link.

Now we have a bunch of messy HTML of the entire Wikipedia page which is rather hard to work with. So we are going to now want to find out which section of HTML (World’s Busiest Container Ports table) that we want to keep and throw out the rest.

The individual html_nodes returned in list format, and the section that we are looking for is the second element of the list data[[1]]. Let’s make that element a data frame and name it df and rename Jurisdiction as economy.

That is much easier to work with than raw HTML, however the data are far from tidy. As you can see we have many columns for the different years instead of having one column Year. Luckily it it easy to change this using the tidyr package.

Withtidyr::gather(), we can take all the column names that include Year and Volume data and gather them into only two columns. We do this by first specifying the key = year and value = volume for all the Year columns.

This is a stylistic preference of mine. I like to convert all column names to lower case because I find it easier to reference during the data cleaning process. After cleaning the data, we will then capitalize each variable, so that they look good in the final output.

Now that we have a tidy data frame, let’s move on to cleaning it.

This first thing we want to do is address the NA values present in the data.

Let’s have a look using purrr::map(). I highly recommend learning how to use functional programming with the purrr package. It is applicable basically anytime you think to write a loop. A good place to start is the Iteration Chapter from the free online book R for Data Science by Garrett Grolemund and Hadley Wickham.

It appears we have 5 NAs in the volume column. We should inspect these values.

Given the poor ranking of these 5 ports, the lack of information for year 2004 is probably because they were out of the Top 50 at the time. We will remove these values from the data.

You may have noticed that year and volume are both character vectors when they should be integers. This has to do with how R read in the data from the HTML file. We should look at each of these variables individually and take the necessary steps to convert them into their proper types.

We will first look at year:

As you can see we have a number in brackets attached to the end of our year. This is the way that tidyr read in the column names. The best way to reformat year is by first using regular expressions to locate the unwanted characters and remove them using stringr::str_replace(). After that we can convert them into integers.

Everything looks in order. Now onto volume. We will start by filtering out these "N/A" and blank spaces.

We can’t quite change the type of Volume until we remove some other non-numeric characters first, notably the comma separating the thousands place. Let’s test this out and see if we can convert it successfully.

It looks like we have received a warning. Maybe we are not done here. The output says that there were NAs introduced let’s see where they are:

It looks like Colón, Panama in the year 2009 is the only data point that is giving us trouble. Let’s see what this entry looks like in our original data frame:

So our problem has to do with these brackets at the end of the volume value. Let’s try again while also specifying the removal of these brackets.

It appears to have run with no errors! Let’s move on to converting the character vectors port and economy into factors.

It appears to have run with no errors. We will now have a look at the port factor if you are unsure whether it succeeded.

The values look logical, but some of them are rather long. We are now going to recode the factors using forcats::fct_recode so that the values are not so long for certain ports. 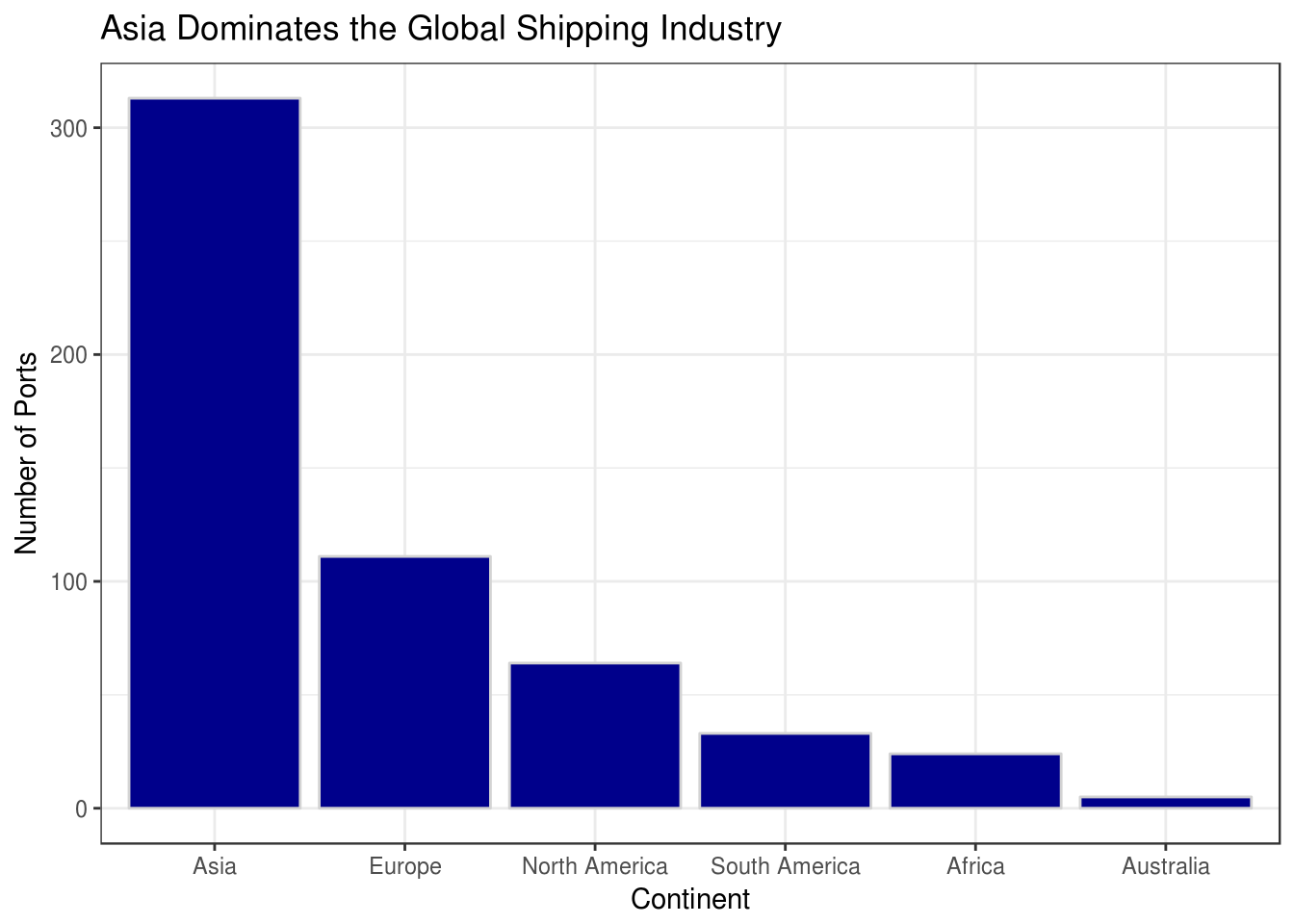 Interesting. It looks like the Asia and Europe dominate the World shipping economy with North America coming in at number 3.

Now we have a tidy data set, but before we move on to some more visualizations and analysis, let’s captitalize are column names, so that they look nice in our plots.

First we will make a list of continents that will be passed into our function:

Now we will create a function named plotly.fun() which will allow us to plot each continent without rewriting the code by passing our continent list that we made in the last code chunk.

The map function takes the cont.list that we created as it’s first argument, passes each continent into the plotly.fun() which then takes our data frame (df) as the second argument. The output is a list with each element of that list a plotly plot of a continent.

Let’s plot out each of these plots using plotly::subplot()

When analyzing these plots, three things really stood out to me:

We have already scene how the ports perform grouped by continent, but now let’s have a look at how each country performs by grouping by Economy.

First let’s group by country and summarise the average volume. Then we will create a variable named Rank, so that we can filter out the top 10 economies.

Now let’s take the list of the Top 10 economies and join it with our original data set so that we can compare Volume. We will also create a rank column that ranks the top 10 for each year.

Great now we will see how these economies match up amongst each other.

Figure 2: Hover over points to see more information. You can also zoom in on the plot by clicking and dragging a window on the desktop on the plot.

As you can see China is by far the most dominant shipping economy in the world with more than the next to countries combined.

It appears that the Asian economies are the largest in scale. Let’s subset the data to compare Asian economies on a map. We are also going to exclude Saudi Arabia and UAE for mapping purposes and calculate three new variables startYear, endYear, and n (number of years), so that we are able to calculate annual growth for each port.

This bit is a little complicated. We are going to create another asia data frame by joining the data frame that we just made (asia.1) with the original data frame (df) so that we can get the volume value for each asian economy. We are actually making two joins here: 1. for when the Year (from df) equals startYear (from asia.1) and 2. when Year equals endYear. Phew. Now the easy part. We are going to mutate (make new column) for Annual Growth by plugging in the variables that we have already made.

It worked. Now let’s add some coordinates so that we can plot this information on the data on the map. We are going to use ggmap::geocode(), which connects with Data Science Kit’s API to retrieve place information.

After you have the asia codes loaded, attach them to the asia.2 data frame and output a new data frame named asia.

For our plot let’s create a new column called Category which will color code the different Ports.

Here is some custom HTML that we will insert into our leaflet plot so that the hovertext looks nice.

Let’s finally see what it looks like on a leaflet() map!

Figure 3: Two finger scroll to zoom in and out

I found it interesting to go port by port and see how the sea meets the land. Most large cities are built by the water to trade, and in this map some of all the largest ports, like Shanghai and Hong Kong, are also the largest cities in their respective countries.

With this project, I hope you learned a lot. We went through a lot of data manipulation and preparation, which is usually the meat of any project that I have worked on. We also saw how to work with a variety of packages, notably the rvest package for extracting HTML data and the javascript plotting packages plotly and leaflet for interactive plots. If anything was unclear, feel free to leave a comment below!

Thanks to all the hard work put in to make my life easier! Wouldn’t have been possible without the help of: