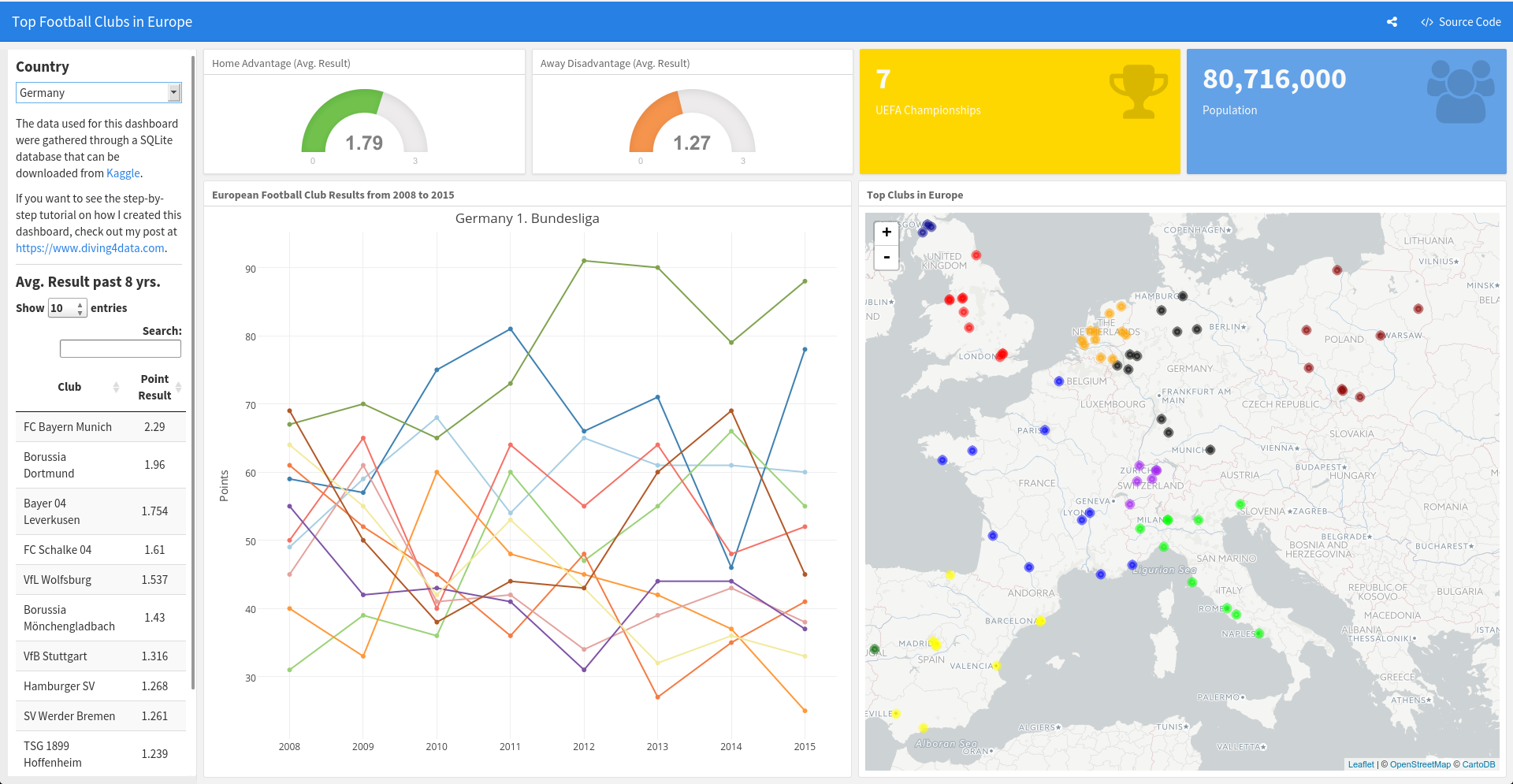 European Football is something that has really grown on me while living in Hamburg. I have had the pleasure of a going to multiple HSV and St. Pauli FC games, and I must say that the atmosphere is nothing short of amazing. I wanted to dive deeper into the subject and have a look at the different leagues around Europe and their respective teams. To see the live dashboard click here

First we are going to need to download the SQLite database that is needed for our analysis at https://www.kaggle.com/hugomathien/soccer. After you have the database downloaded make sure to put it in your working directory.

Using the DBI and RSQLite packages we are going to establish a connection with the database with the following commands:

Now that we are connected to the database let’s have a look at the different table names that are present in con.

You can look into the different tables to see what data is available or reference the kaggle page where there are descriptions for each table. However, for the sake of this analysis we are only going to be using the Country, League, Match, and Team tables.

In order to bring these tables into R and convert them into data frames we are going to use simple SQL commands in addition to chained dplyr commands. You could create more complex SQL commands in order to select the specific columns that you want; however, I prefer to use dplyr’s query commands as opposed to SQL’s.

Have a look at each of these data frames. You will notice that they are all connected by their respective IDs. The important thing now is to bring all this information together into one master data frame.

The hierarchy that connects the ID codes to one another is:

The tables appear to have succesfully joined. Now let’s try to join our newly created data frame, df, with the matches data frame.

View the newly joined data frame in your console. It is a tad large to view here.

Now we need to attach teams to our data frame. Joining teams will be more challenging because the newly joined data from matches has a home team and away team that are uniquely identified by respective API codes.

Therefore we are going to need to make two joins with teams, one for home and one for away.

Great! Now we have each of the four data frames joined, but with many unnecessary columns, in particular the ids columns. So let’s select only the columns that we want to keep going forward.

Our data frame tells us how many goals were scored by the home and away teams, but says nothing about the result of the match. Thus we are going to create new variables named home_result and away_result that calculate the earned points for each match.

The point scale goes as follows:

This data frame is good and all if we want to look at each match individually, but what we are really after is seeing how team’s performed each season.

In order to do this we are going to need to dplyr::summarise() both the home and away results dpylr::group_by() the country, league, season, and team.

We can now combine the home and away results into a new data frame named teamResults. We are also going to make a couple new variables called total_points, total_games, and year.

Now that we have a list of top teams, apply it to our teamResults data frame so that we only see results from the top teams. Let’s save our new results to a new data frame named top_team_results. We will also exclude Belgium in this step because they only have one team listed.

Our data frame should now be structured like this:

This data frame can now be used to create the plotly plot that is on the dashboard. You can check out the source code of the plot by going to the dashboard and clicking the Source Code button in the top right corner.

We all hear about how important playing at home is, but really how important is it? and is it more important in some countries as opposed to others? In this part of the analysis we will take a look at just how much on average home results differ from away results.

In order to calculate the metrics we need, we have to:

Now let’s see which country has the largest difference in home and away results:

It looks like it is really hard to come away with a win on the road in Spain, while the following 8 teams are more or less similar, and Scotland appears to have a slight difference in average result.

Adding Map Coordinates to our Data

In order to create the map that is in the dashboard, we need to gather geocode data for each of our clubs.

First, let’s select the country and team columns from top_team_results and save our results to a data frame named location_df.

We can group and summarise the variables so that we don’t have duplicates of the teams. Then we will simply remove the n column.

Now let’s call geocode() from the ggmap package to get the coordinates for each club. We are going to query the google API by using both the club name and the country using the with() and paste0() functions.

We now have the longitude and latitude for each club. Let’s now combine the data frames into a data frame named team_locations.

With our newly created team_locations data frame, you are now ready to plot the clubs on a leaflet map. To see how I created the map for the dashboard, check out the source code of the map by going to the dashboard and clicking the Source Code button in the top right corner.