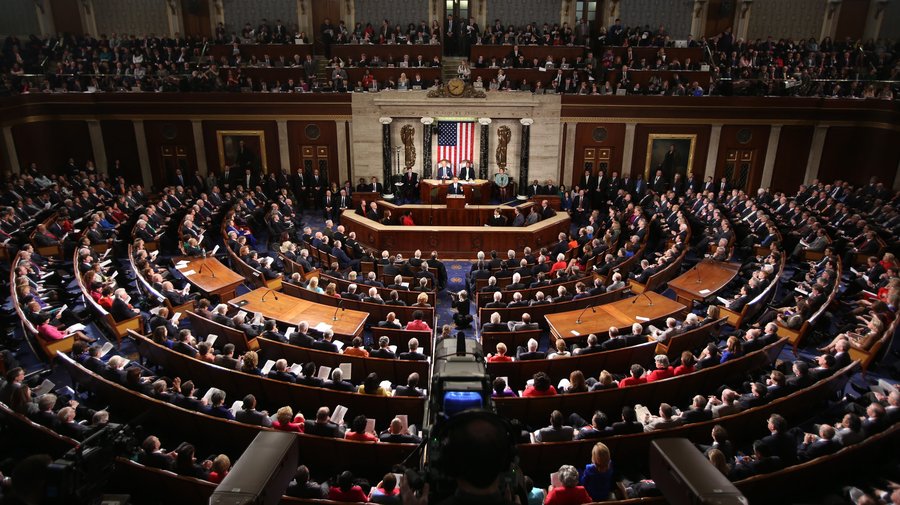 The State of the Union address was originally intended to be an address given by the President to Congress in order to report on the condition of the nation and what the President believes the nation’s priorities should be going forward. The State of the Union has now shifted towards an address to not only Congress but the American people as well. I thought these addresses would be a great way to practice text analytics given the nature of the speech, one would expect to uncover the sentiment of the President’s address and uncover important topics.

I gathered data from 1980 to 2017 from the American Presidency Project, a non-profit and non-partisan of presidential documents on the internet. The average length of each address was, which would be a rather long read if I were to go and read each one, so I hoped to use text analytics tools to uncover the general sentiment of each address.

The data were brought into a csv file that you can download here separated by |.

Now that we have the data in R, we are going to transform the Address into a Corpus object using the tm package. Corpora are collections of documents containing (natural language) text. The VectorSource() function is used to tell the Corpus function that we are using each row of our data frame (address) as individual documents.

Now that we have our corpus object initiated, let’s remove punctuation and stop words (and, the, or, etc.) from the document using the tm_map(), RemovePunctuation(), and removewords.

Now we are going to use DocumentTermMatrix which coerces the corpus to a term-document matrix that gives us the sparsity and frequency of the words.

Now that we have our Document Term Matrix (DTM), we can remove the sparse terms from the DTM, where the sparse percentage of empty elements are in the top 90%.

The size of our DTM is now reduced in size. Now we can reformat it to a tibble which is easier to work with.

Each column refers to a word in our DTM while each row refers to the address, and the numbers in the matrix are the frequency in which they appear in the respective address.

It appears that there are 6,044 unique words in our DTM, so when we combine we are going to need to gather the columns

This is the tidy format that we are looking for, but we have words that over around 170,000 words that have count equal to zero. Therefore, we are going to remove those entries.

As you can see, the number of entries in the union.combined data frame has greatly decreased. 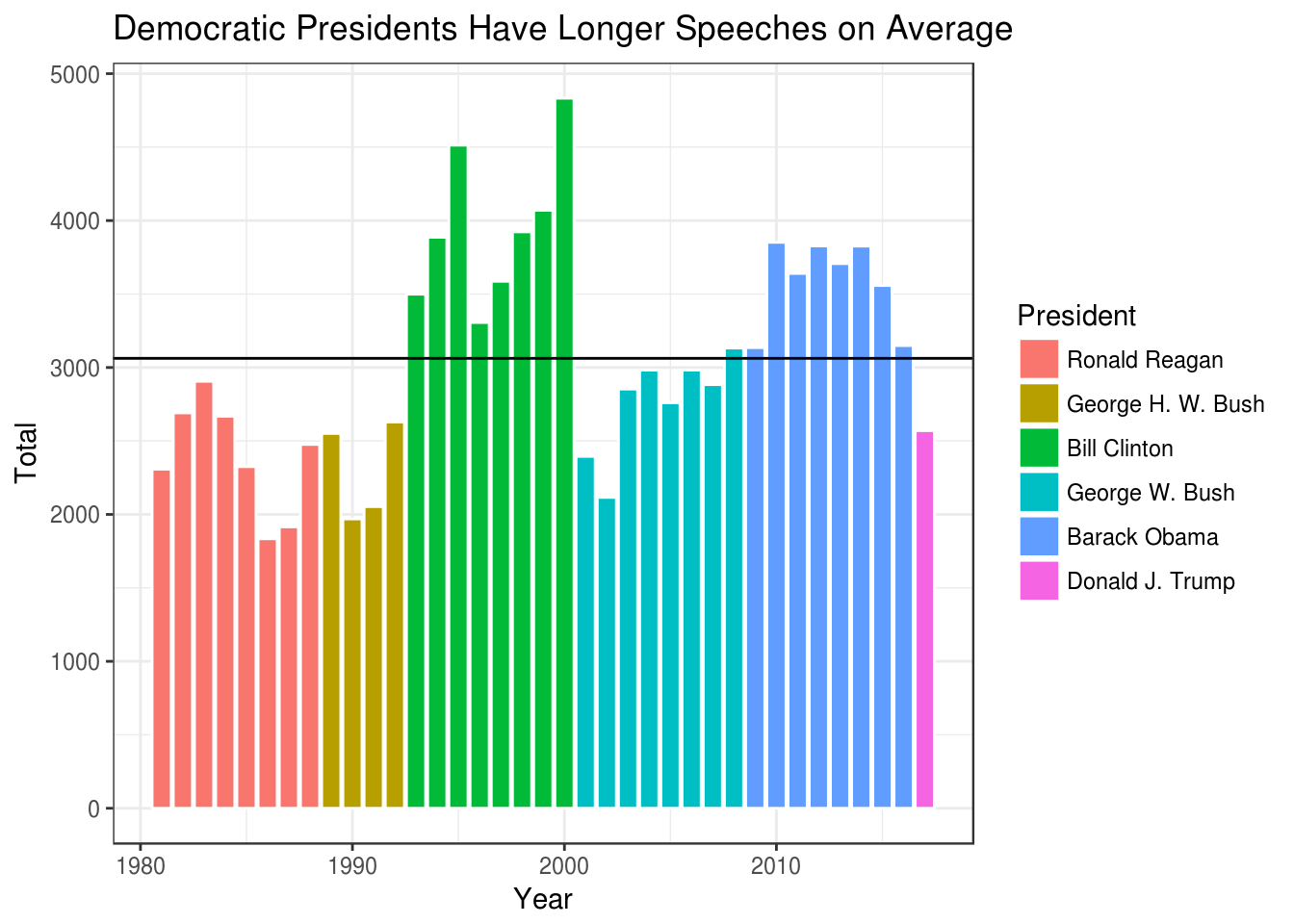 It appears that Bill Clinton and Barack Obama have consistently longer addresses than the other presidents. It is perhaps interesting to note that they are the only two Democratic Presidents in the data.

In this part of our analysis, we are going to use tf-idf in order to derive the importance of words in comparison to the word’s frequency in other addresses. The more frequent “rare” words that are in a given address have higher tf-idf scores. According to Wikipedia, tf-idf is defined as:

In information retrieval, tf–idf is a numerical statistic that is intended to reflect how important a word is to a document in a collection or corpus. It is often used as a weighting factor in information retrieval, text mining, and user modeling. The tf-idf value increases proportionally to the number of times a word appears in the document, but is often offset by the frequency of the word in the corpus, which helps to adjust for the fact that some words appear more frequently in general. Nowadays, tf-idf is one of the most popular term-weighting schemes. For instance, 83% of text-based recommender systems in the domain of digital libraries use tf-idf.

One can calculate the tf-idf calculation using the tidytext package. I recommend checking out the free online book that shows you step-by-step how you can do text analysis in R using this package. It was a major resource that I used when performing this analysis.

Now that we have the tf-idf calculated for each word, let’s plot the top words for each President. Granted that some Presidents have more speeches than others, we can still have look at what topics were important to each of their Presidency’s. 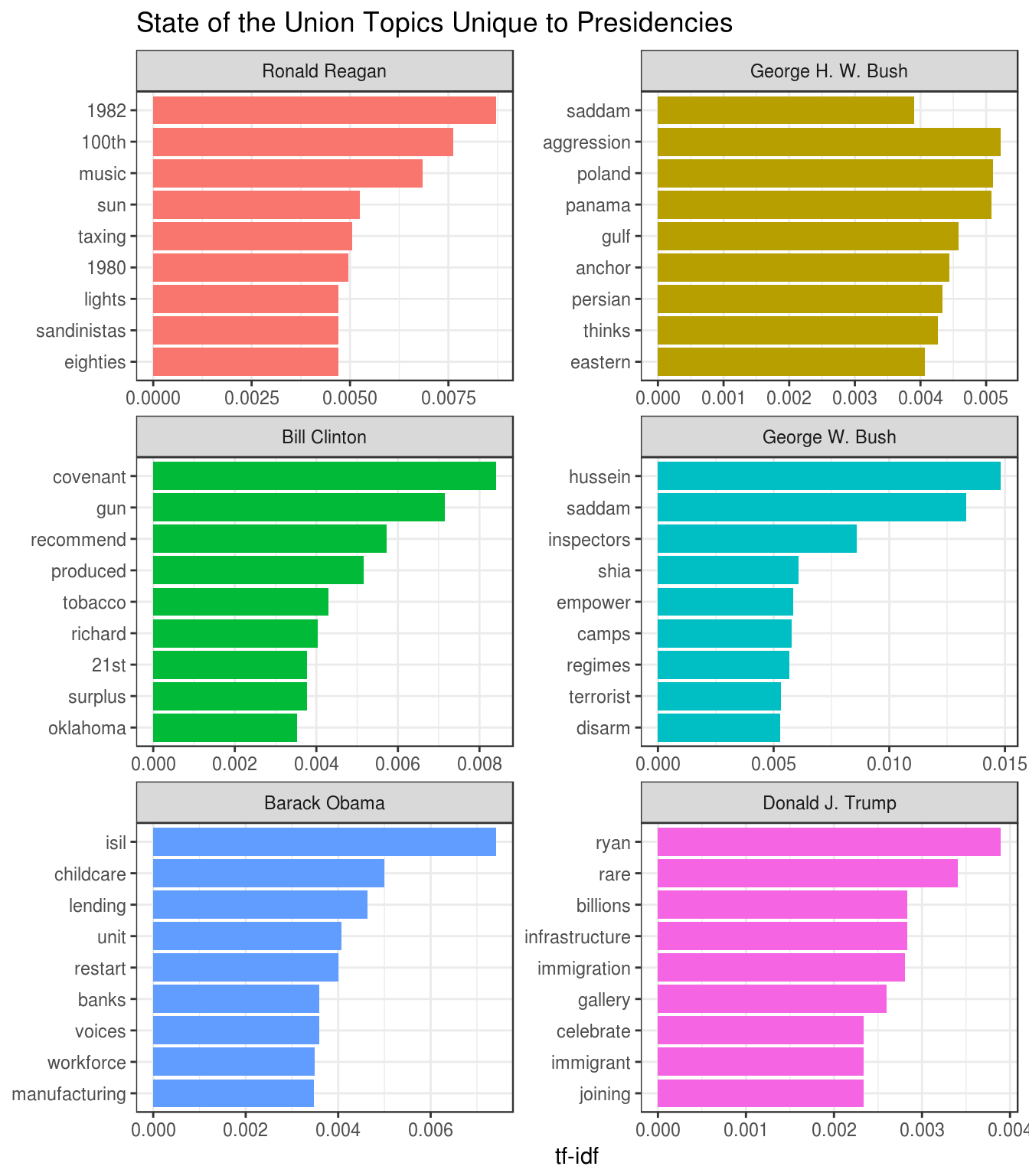 Some of the words that appear in the plots seem to be obvious like Sadam Hussein which appears in both Bush Presidencies or the large prevalence of ISIL in Obama’s. This is intuitive because the State of the Union is meant to address the most prevalent problems that the nation faces. However, others were not so easy to understand, notably “100th” from Reagan’s addresses and “Ryan” in President Trump’s. In order to find out the meaning of these words, I had to dig into the text.

This gives a glimpse into the power of text analytics and how you can explore a huge amount of text with relatively few lines of code in order to get an idea of what the general message is about. At the very least, it gives you hints into what is important and where you should look to learn more.

Lastly, I want to show you how to investigate words that have negative sentiment. This helps to give an idea about how the President describes these problems. We will visualize the output in the form of a word cloud, a visualization method that is becoming increasingly popular in the world of text analytics.

Let’s take a look at two recent addresses that we expect to draw relatively high negative sentiment: first President Bush’s State of the Union following 9/11 and second the 2008 economic crash that happened during Obama’s Presidency.

In order to do this, we need to make use of the wordcloud package and bing sentiment data frame that can be found in the tidytext package. The list of sentiments from bing consists of only two results, negative or positive. 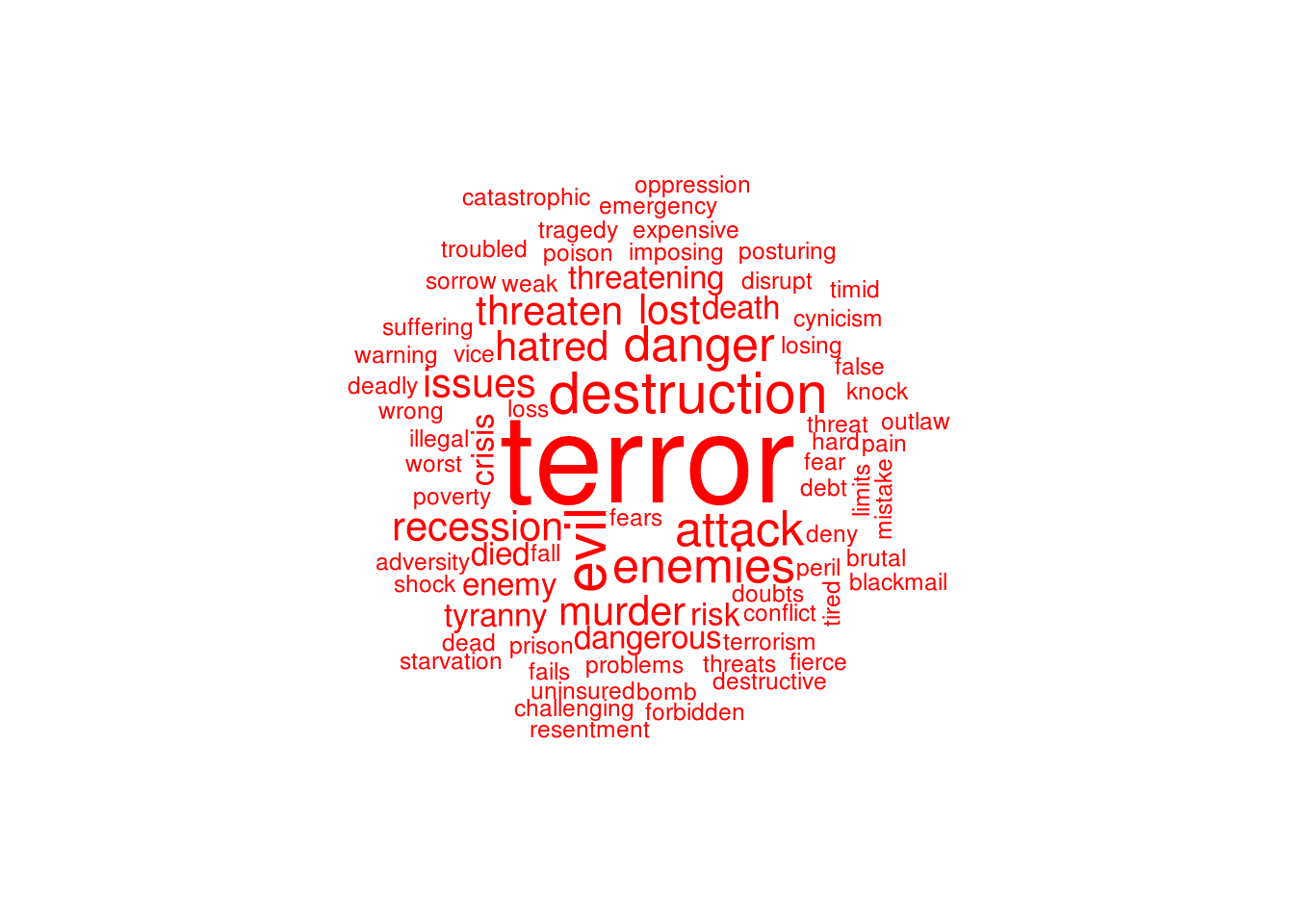 2009 State of the Union: Financial Crisis 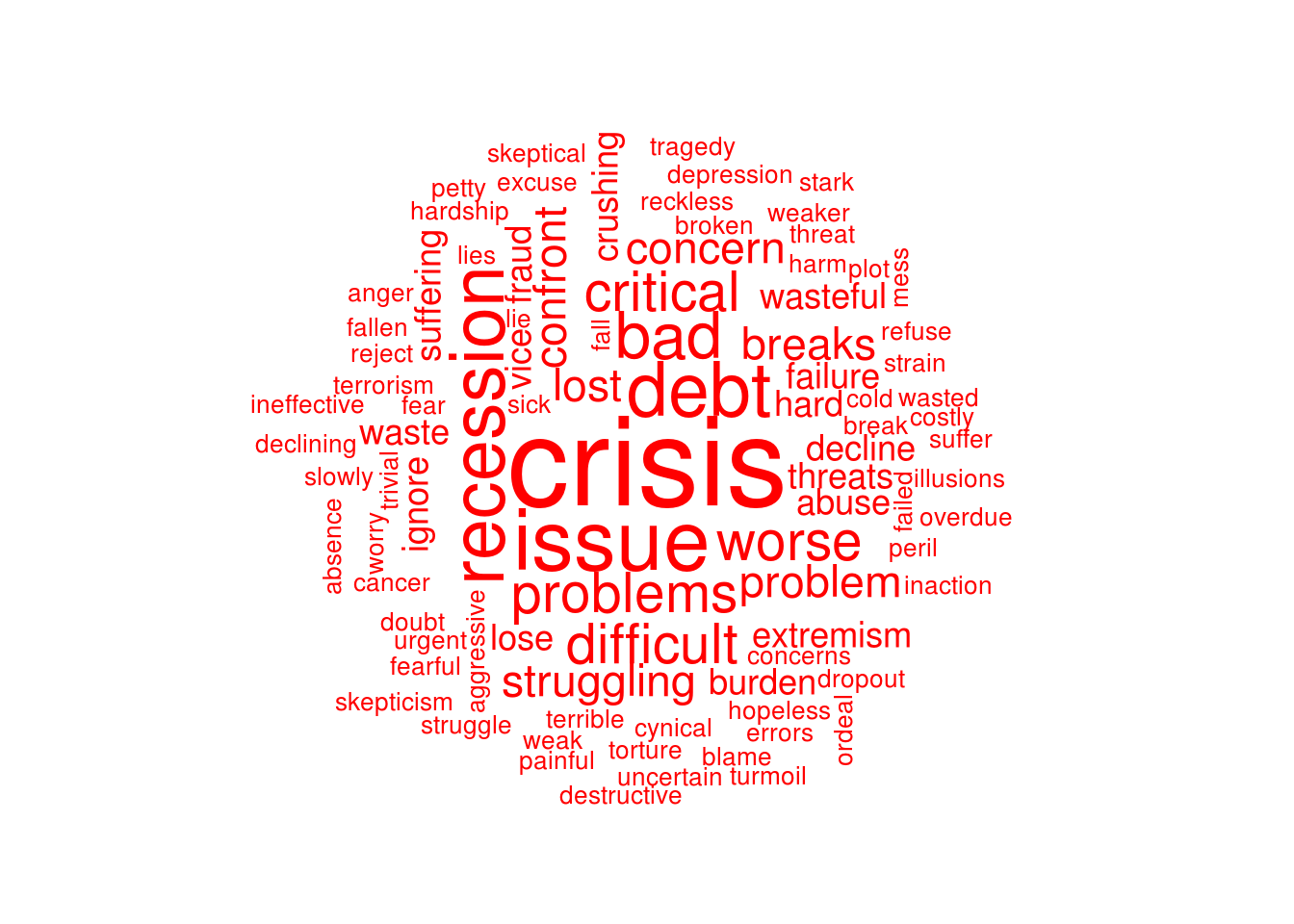 Can you tell which plot belongs to which address?

I hope that this post gives you a glimpse into the power of text analytics and how you can explore a large amount of text with relatively few lines of code in order to get an idea of what the general message is about. At the very least, it gives you hints into what is important and where you should look to learn more.

Thanks to all the hard work put in to make my life easier! Wouldn’t have been possible without the help of: